Assam is gearing up to ensure a free and fair Lok Sabha polls. The state is prepared to procure at least 235 companies of security forces to help the Election Commission ensure smooth conduct of the polls which is slated to begin on April 7.

Sources told Assam Times that plan for security deployment is ready and that the state police alone will have over 100 companies to manage the polls.

The state at present has 122 companies of central forces and the deployment of 77 companies are on the cards. In addition, the Centre will rush 58 more companies from the Centre.

The new companies will comprise ten would be from CISF, 14 from SSB, six from ITBP and 20 companies from the state police forces from the neighboring states.

The authorities have identified some districts as critical in view of the recent incidents. These include Sonitpur, Kokrajhar and Chirang. More forces would be rushed to these districts.

4 Jul 2013 - 8:15pm | SK Hasan
Simaluguri police recovered a point two two pistol from Tarun Saikia's compound of Simaluguri Hatimuria village on Thursday. It may be mentioned that Tarun Saikia was arrested by the Simaluguri... 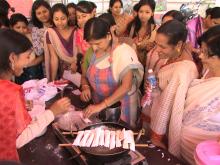