In yet another major breather for KMSS, a lower court in Titabor granted bail to Akhil Gogoi a day after police shifted the KMSS president from Guwahati Central Jail.

Judicial magistrate Abhijeet Kumar Baruah, who reserved the bail order on Sunday granted bail on a personal bond of Rs 10,000 on Monday after examining the medical reports of the KMSS president and the case diary filed by the Titabor police.

Gogoi was airdashed to Jorhat jail on Sunday after police got transit remand of the KMSS president in connection with the Case No 17/14 registered on February 3. 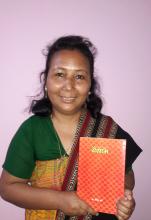 22 Dec 2017 - 12:09pm | Shajid Khan
TANGLA: Noted Bodo writer Dr.Rita Baro has fetched no less pride to the people of Assam when she was declared the recipient of the Sahitya Akademi Award in Bodo language. Dr Baro has been...

24 Apr 2014 - 6:39pm | AT News
Polling has ended with a brisk note in Barpeta as soon as the clock struck at 5 in the evening. The turn out is set to cross 85 per cent to be confirmed by the country’s poll panel.Heavy turn out of...