Tezpur, the city of cultural hub of Assam shaped numbers of cultural images towards the society. Dr. Pratibha Sharma, a promising artist of Sattriya Dance was born in Tezpur in an educated family under the parenthood of Sachindra Nath Sharma and Sabita Sharma. She was started her formal lessons in Sattriya at her early childhood under the guidance of Guru TileshwarTamuli during 1982. Later on she has been trained under the tutelage of eminent dancing maestro Guru Nrityacharyya Jatin Goswami, a recipient of Sangeet Natak Akademi Award and Padmashree. Since 1982 Pratibha has been learning, researching and interpreting Sattriya dance and music. Many choreographic presentations have also worked on of her own under the supervision of her Guru. During this passage over the years she has been trying with utmost sincerity to enlarge the performance canvas and expand her gamut constantly drawing resource material from the vast literary mass of the Vaishnava resurgence of Assam. During 1982-1991 she has performed about 500 stage shows inside and outside the state in Sattriya Dance. In the year 1987She has Joined in “National learn to live together camp” of Indian Council of Child Welfare (ICCW). For her dedicated mind, she was alsoselected to participate in the prestigious “Republic Day” parade at New Delhi in 1989.Besides SattriyaPratibha has been trained in Kathak Dance under Guru Shanti Shankar Das Gupta since 1991 at Tezpur and completed Alankar (M.Mus) under the able guidance of Bipul Ch. Das, who is senior disciple of Padmabibhushan Pt. BirjuMaharaj. 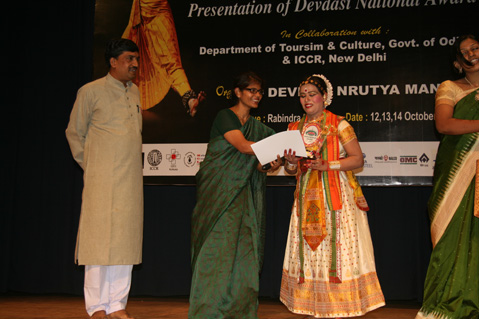 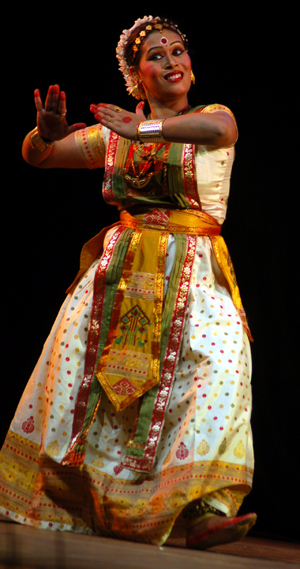 Since she started her dancing career, Pratibha could not back and always step forward. It is meaningless to tell that one can’t leave the hall, while she is performing. In countless number, Pratibha Sharma was also invited to perform in some significant platform throughout the country. Like, Uday Shankar Dance Festival, Kolkata, Dec. 2008; Konark dance and Music Festival, Feb. 2010; Cuttak Mahotsav, Cuttak, Orissa, 30th April, 2010;OCTAVE , Aurangabad, 20th Nov, 2010;International Trade Fair, SNA sponsored at Pragati Angan, New Delhi, 22nd Nov, 2010; ‘Devadashi National Dance Festival’, 12th Oct. 2011, Rabindra Mandap, Bhubaneswar, Orissa are some notable among the list. She has also organised a numbers of workshop in the state for popularising the Sattriyadance form of Assam. Pratibha was invited in the impressive Workshop on enhancing the teaching skills and curriculum development of Chhau Dance. October, 2011, Bubaneshwar, Orissa. Organized by CCRT, New Delhi, Govt. of India to act as a resource person. For her struggle and attentiveness she has received lots remarkable  award and fellowship at different level.Received junior Fellowship from the Ministry of Tourism & Culture, Govt. Of India for Sattriya dance in 2009.For her smooth footsteps She wasawarded“National Nrityamani Award”, 2010, at National Dance and Music Featival, Cuttak, organized by Utkal Yuva Sanskritic Sangh, Orissa and ‘NrityaJyoti’ title from Devadashi Nrutya Mandir’ Bhubaneswar, Orissa.She is now acting as a panel member of CCRT, Govt. of India.Pratibha Sharma performed innumerable Kathak dance shows with Guru Bipul Das in his Choreographic works She has achieved privileged due to her guru to attend several workshops of KATHAK under the guidance of Pt. Birju Maharaj and Swashwati Sen. Pratibha has trained Deodhani Dance under Sangeet Natak Academi Awardee  Lalitch Oja and  Gunakar Dev Goswami. 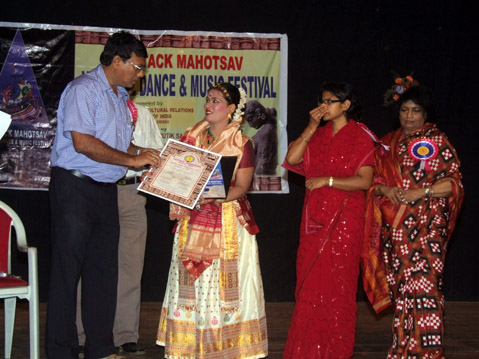 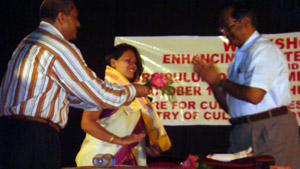 One of her step towards society is the SAPTASWA.. the rays of performing arts, a Socio-cultural organization raised in the year 2011 for Promotion of Literature, Art, Culture providing a common platform has been created by Pratibha Sharma. Now, every year Saptaswa presenting Nrityakalpa National  Dance Festival, a festival of young classical dancers, in Tezpur, which is an attempts through which allow the young exponents to speak and share their thoughts and ideas through dance and communicate to the youthsin the contemporary world.

Besides her immense dancing career, equally Pratibha holds a strong bio data in academics. Pratibha completed her Master degree in Botany from Gauhati University and subsequently owned the Degree of Doctor of Philosophy (Ph.D) in Plant Biotechnology from Gauhati University. She has lots of Research publications of National and International repute and visited outside the country for many research activities.Currently she is engaging as DBT, GoI-Post Doctorate Fellow at Tezpur Central University. Pratibha is living with her very supportive husband Mridul (Sarma) and pretty daughter Hansaja. 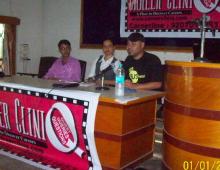 23 May 2012 - 5:49pm | editor
Petrol pumps across the state are running dry on Wednesday under the impact of the Assam Petroleum Mazdoor Union’s strike demanding adequate security for petroleum drivers. The drivers are away...

14 Jul 2015 - 7:49am | AT News
The All Assam Student Union has called off the 100 hour ONGC bandh which started on Monday.Talking to Assam Times, Sivasagar AASU leaders said that the decision was taken at their tripartite talks...