Eight IRB jawans along with five others sustained serious injury in Dima Hasao district at a tragic mishap on Monday.

The mishap took place in the wee hours when the bus carrying the IRB jawans collided its head on a dumper at Harangajao area on their way to Nagaon to be deployed in election duty slated for April 24.

The IRB jawans were believed to have been coming from Tripura. The injured have been shifted to the Harangajao Hospital where they are battling for life. 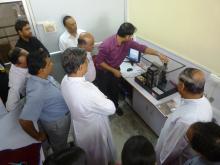 All for justice to Renuka

11 Oct 2014 - 6:17am | AT News
HANTIGIRI NARZARY, KOKRAJHAR: Hundreds of women activists under the banner of the All Bodo Women’s Welfare Federation staged protest in Kokrajhar on Friday demanding high level inquiry into...

18 Dec 2010 - 2:15pm | editor
Yet another ULFA top leader has been arrested in Bangladesh. According to reports, top gun of the insurgent outfit and close aide of Commander in Chief Paresh Baruah. Antu Chaodang has arrested...