Probe into outpost shoot out

The Tinsukia district administration has ordered a magisterial probe into the shoot out inside the Guijan police outpost where a youth Kartik Das was killed on Wednesday wee hours.

Apart from this, a departmental probe would be initiated against Thaneswar Phukan who shot dead the youth Congress leader.

3 Mar 2008 - 6:02am | editor
From Assam Assembly, Guwahati:The Opposition has come sown heavily on the Assam Government for its failure on all fronts. Reacting to the Assam Governor’s address on the floor of the House on... 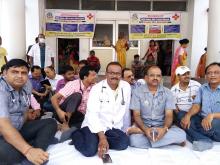 7 Jun 2017 - 12:18am | AT Kokrajhar Bureau
Patients along the Kokrajhar RNB civil hospital have been deprived medical services till 11 am today due to sit in dharna carried out by doctors under the banner of Indian Medical...

2 Dec 2010 - 3:28pm | editor
Both government and ULFA are gearing up to hold talks in January. In all probabilities, the talks would take place sans Paresh Barua. According to sources, Assam chief minister Tarun Gogoi is getting...
Follow @Assam Times