His reaction came a day after BPF MLA Pramila Rani Brahma said that BPF was all set to join NDA at the Centre while it would remain with Congress in the state.

9 Jul 2018 - 8:42am | Shajid Khan
TANGLA : In a bid to build a competitive mindset among the students, the All Assam Students’ Union (AASU) Tangla regional unit organized a special felicitation programme for the meritorious HSLC... 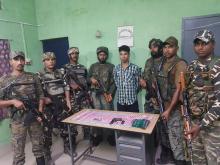 3 Aug 2019 - 7:18am | AT Kokrajhar Bureau
KOKRAJHAR: Security forces apprehended a hard-core cadre of the National Democratic Front of Boroland-Saoraigwra faction (NDFB-S) on Friday from Samukha Nala area under Bishmuri police outpost in...