The worst-hit district is Baska where militants have killed at least nine more people forcing the authority to clamp curfew in the BTAD district.

Local residents claimed to have recovered nine more bodies from a village in Nayanpur after the militants set on fire at least 40 houses of a tiny hamlet.

Five bodies were identified as Somesh Ali, Hajera Bibi, Rahima Khatun and Aayesha Khatum. With this, the death toll in the BTAD clash has gone up to 20 during the last 24 hours.

Further the miscreants set ablazed a local forest office in the evening.
On the other hand, army jawans deployed to deal with the situation start staging flag march from Friday afternoon.

The Bagsa district administration further has clamp curfew till 8 in the morning on Saturday.

21 Jun 2017 - 8:07pm | Suvansu Bora
The 3rd International Day of Yoga was observed in Golaghat  on Wednesday  with a slew of programmes organized by the district administration in association with Patanjali Yoga Samiti... 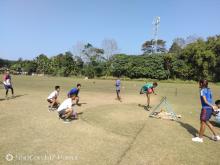