Two NDFB(S) militants were lynched by villagers in Sonitpur district on Wednesday.
The incident took place at Ghiladhari in the evening where the three Bodo militants arrived in the village to extort money.

Villagers in lage number came out to the street and tried to capture the duo. When they tried to escape from the spot the villagers overpowered them to be lynched on the spot.
Policemen arrived in the spot and recovered the bodies.

NDFB(S) militants have been unlashing terror in the entire area in the form of killing, kidnapping and extortion forcing the local residents to mercilessly deal with it. 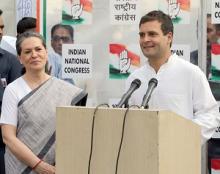 24 May 2014 - 10:49pm | Rajiv Roy
The Congress debacle was imminent and equally looming was a harsh post-mortem that followed. The Congress in its latest sitting in New Delhi have arrived at communication strategy of the party was...

Erosion - dark side of the Brahmaputra

3 May 2017 - 8:38pm | Clara Mariona
The Brahmaputra River is a massive river born in Tibet that sweeps its way along Assam to finally reach the sea in the Bay of Bengal (Bangladesh). The Brahmaputra is one of the major rivers in Asia,...

Assam State Boxers, Kalpana and Pranamika get award for their outstanding performances

8 Aug 2007 - 4:43am | editor
Guwahati : Two star boxers of the state Kalpana Choudury and Pranamika Bora had been awarded cash incentive by the central government for their magnificent performance in the international meets....