Kharge on visit to Guwahati

AICC leader Mallikarjun Kharge is on a visit to Guwahati  on Monday to lead a protest over the move to hike the train fares.

According to AICC sources, Kharge who was the railway minister in the UPA government would take on the Modi government for the proposed hike in the passenger and freight rates.

Notably, initially the Modi government proposed to hike the rail fares citing a pending proposal during the UPA government. But Kharge made it plain that the entire proposal was left to the next government.

25 Feb 2008 - 12:49pm | editor
Altogether 61 poachers in the Manah National Sanctuary on Monday have surrendered before the BTAD administration at Lobdang guri market in Bagsa district. They further have left some arms and... 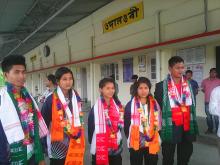 24 Apr 2016 - 12:49pm | Jayanta Kumar Das
People of Udalguri have much to rejoice with the good news of winning 4 gold and 1 silver by 3 girls and two boys from Udalguri representaing India in the first ever international event of Wushu held...

No silver lining on Langpi logjam

20 Nov 2008 - 9:06pm | editor
Assam and Meghalaya on Thursday have failed to get a silver lining in the border dispute centering around Langpi. Participating in the meeting at Byrnihat, Meghalaya Chief Secretary Ranjan Chatterjee...