FINER has welcomed the rail budget after it was tabled in Parliamnt by Sadananda Gowda on Tuesday.

According to the industry body, the rail budget has not only rightly diagnosed the ailments of the Indian Railways, but also prescribed a clear roadmap and corrective actions ahead.

FINER officials said that Gowda has come out with a strong action plan to complete pending projects including projects of national status in the North Eastern region in a time-bound manner.

1 Oct 2016 - 10:26pm | AT News
NorthEast United FC kick-started their campaign in the 3rd Hero Indian Super League (HISL) on a winning note with a 1-0 victory over Kerala Blasters in Guwahati on Saturday.After a barren first...

8 Feb 2014 - 12:42pm | AT News
A KMSS-sponsored protest against the alleged horse trading in the recent Rajya Sabha polls touched down a new low when six activists of the organization staged a naked dharna in Dispur on Saturday.... 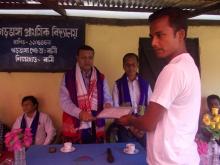 21 Apr 2013 - 11:14pm | Peter Alex Todd
Border minister  Siddique Ahmed, made his maiden visit to Garbhanga village on Friday, in the Garbhanga Reserve Forest that is just 18 Kms from Lokhra near the national highway. The visit of the...
Follow @Assam Times