Senior journalist Satish Chandra Sharma passed away on Thursday. The 68-year long journalist who worked with United News of India for nearly four decades died at a local hospital where he was undergoing treatment for the past few days

Sharma started his career at the Shillong bureau of UNI in the sixties decade of the last century.

He went on to serve as bureau chief at Gwalior and Guwahati, before retiring from Ranchi in the same capacity in 2006.

19 Nov 2011 - 12:37am | Anup Biswas
The All Dimasa Students' Union strongly oppose any such move of usurpation of the ancestral lands of Dimasas and also won't accept any such form or system which will be undermining the present...

7 May 2009 - 1:41pm | editor
Two hardcore ULFA rebels died at an encounter with the police and security forces near Sonari in Sivasagar on Thursday evening. According to information, the incident took place at at Benganabari... 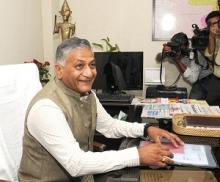