After ending their week long fast, the KMSS activists staged protest in front of the Kamrup( Metro) DC office in Guwahati against the move. They further threaten to launch a massive agitation if it fails to listen to them.

The government recently notified a provision to facilitate recent change in the categories of agricultural lands in to other categories which have been lying unused for over ten years.

28 Nov 2012 - 5:04pm | Anup Biswas
In protest against the proposed extension of the term of Dima Hasao Autonomous Council... 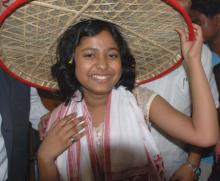 7 Mar 2008 - 4:20pm | editor
SA RE GA MA PA Little Champ winner Anamika Chowdhury, being felicitated by numbers of organizations and her well-wishers on 07-03-08 at Guwahati, after she arrived here today for the first time with...

18 Jan 2016 - 9:54pm | AT News Imphal
With the Manipur Government’s persistent refusal to acknowledge the tribal rights and privileges as enshrined in the Constitution of India, and the Central Government continuing to turn a blind eye...