Assam continues to grapple with a grim flood situation where the toll has gone up to 3. The third victim is a 25-year youth at Nauboicha in Lakhimpur.

The worst affected districts in the second wave of flood are Lakhimpur and Dhemaji where the Brahmaputra and its tributaries are flowing above the danger mark.

In Lakhimpur and Dhemahji districts, over 2 lakh people have been rendered homeless and the surging flood waters have damaged over 15,000 hectares of crop lands.

In Dhemaji, 76,894 people of 222 villages under Dhemaji, Sisiborgaon and Jonai revenue circles were affected by the floods till Monday.

CEC confident of free and fair polls in Assam 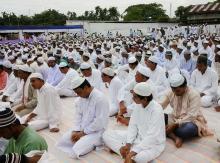 16 Oct 2013 - 2:15pm | Hamidul Gani
Eid-ul-Azha was celebrated on Wednesday with religious fervour and gaiety across Goalpara district along with the rest of the state. The day began with Muslims, attired in their best, offering Eid...

2 Apr 2012 - 4:30am | editor
ULFA’s anti–talk faction steps up activities a week ahead of their Foundation Day slated for April 7. The outfit claimed to have killed three Assam Rifles jawans at an encounter in...