Flood waters are likely to wreak havoc in Lakhimpur and Dhemaji districts again if the rise in the water level of the Subansiri river is any indication.

There has been sudden and steep rise in the water level the river in Arunachal Pradesh for the last couple of hours on Friday posing serious threat to the two districts.

The river is flowing 7 metre above the danger level and if this alarming trend continues, a huge flood wave is likely to wash away Lakhimpur and Dhemaji districts within the next 12 hours.

The panic stricken people in some areas have started leaving for the safe places from Friday morning. /// 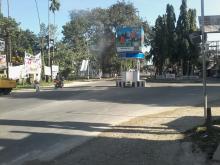 Do or die match for NEUFC

1 Dec 2015 - 7:35pm | AT News
NorthEast United FC and FC Pune City are not giving up on their chances of qualifying for the semi-finals of Hero Indian Super League despite being in a discomforting  position. Both NorthEast...

27 Mar 2014 - 8:39am | AT News
Amid a massive security arrangement, people thronging in thousands in Biswanath Chariali to attend Rahul Gandhi’s rally on Monday.Security forces are fanning across the district to thwart any move by...