Kokrajhar CJM remanded Jaiklong Brahma to judicial custody after the journalist was produced before him on Monday. Brahma was arrested on September 2 for allegedly voluntarily inciting to banned NDFB(Songbijit faction). He was remanded for five days police remand which ended on Monday and produced to CJM court in a tight security.
Tags:

26 Feb 2009 - 8:15pm | editor
Government have considered and approved the request of the Assam Government for conversion of Institute of Advanced Studies in Science and Technology (IASST), Guwahati, presently under the Government... 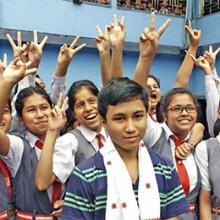 The aftermath of examination results

30 Jun 2017 - 10:27pm | Arindam Garg
It is that time of the year when the results of the 10th and 12th examinations have been declared across India and Assam is no exception and as it happens every year there is a lot of noise around...

7 Apr 2014 - 2:39pm | AT News
The polling is by and large peaceful in the five Lok Sabha constituencies where fate of 51 voters are sealed in EVMs.Polling was summarily disrupted where at least 33 electronic voting machines...