Saibal Das, Howly: Sensation prevails in Howly after miscreants kidnapped a school boy on Sunday. Identified as Azizul Hoque, the son of a local businessman was forcibly taken at a vehicle from his house.

According to a woman who witnessed the incident, four miscreants who came at a Maruti Swift Desire number AS 01 AM 7059, stopped in front of the boy and lifted him forcibly.

Police later intercepted the vehicle at Manikpur with driver named Rafikul Islam of Gohorchock in Barpeta.

He confessed before police that the miscreants hired his vehicle in Guwahati and that he had dropped the miscreants along with the school boy at Balagur in Kalgachia. Investigation is going on. 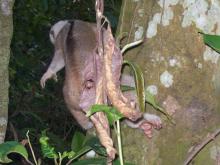 Rescue of a slow loris

13 Jun 2014 - 7:24pm | Rituraj Phukan
One of the rare and enigmatic primates found in Assam, a Slow Loris was recently rescued from the clutches a poacher by a team of forest staff and members of Green Guard Nature Organization at...

14 Jan 2015 - 9:35am | AT News
Forest guards have killed three dreaded poachers at an encounter in Kaziranga on Wednesday after the national park lost four rhinos during the last 13 days.The encounter took place at Burhapahar...