AGP still has a chance: Borgohain

Only an united Asom Gana Parishad will be able to refurbish the image of regionalism. For this the party top leaders must end the internal feud. This was more or less of what Hoomen Borghain said at an AGP political convention in Guwahati on Tuesday.

In his opening speech, the noted critic and journalist said that the regional party still retains good image among the grassroot level and that the party leadership have been failing to take the advantage. He observed that the internal feud within the top leaders has made the party weak during the last ten years.

Borgohain said that this convention at the Machkhowa ITA Complex is the last opportunity for the party to refurbish its image and to save regional party from the brink of collapse.

Noted intellectual Dr Hiren Gohain will open the second session at 10 in the morning on Wednesday while Kanaksen Deka will open the third and last session in the afternoon.

80,000 hectares of land under illegal occupation

29 Mar 2012 - 2:03am | editor
Five neighbouring states have been illegally occupying over 80,000 hectares of land belonging to Assam. Disclosing this at the state legislative assembly, Assam Border Areas Minister of State...

15 May 2010 - 6:27pm | sankal
A student of Regional College of Higher Education, a branch of Central IT College on Friday reportedly tried to commit suicide by jumping from the 2nd floor of the hostel he was staying later... 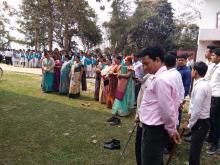 1 Mar 2017 - 6:34pm | Sanjoy K Kakati
The supreme sacrifice of the Assam agitation martyrs was remembered with deep reverence in Raha on Wednesday when the central Assam areas observed the Assam Agitation Martyrs Day.AASU activists in...