V Narayanswamy on visit to Guwahati

Senior Congress leader V Narayanswamy is on a two days visit to the north east amid speculations of his presence in the soon to be held swearing in ceremony of a few new ministers in the Tarun Gogoi cabinet.

Narayanswami, who look after the party’s north east affairs landed at the Borjhar airport in the morning to be received by AICC general secretary Bhupen Bora.

During his visit, the senior AICC leader, whom the party high command has sent to Guwahati on Monday, is scheduled to hold talks with the north eastern Congress leaders and Congress chief ministers.

In his discussion, he is expected to hold talks with Tarun Gogoi along with Nabam Tuki from Arunachal Pradesh, Dr Mukul Sangma from Meghalaya and Okram Ibobi Singh from Manipur. 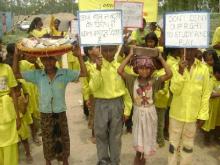 13 Jun 2008 - 2:34am | editor
JBF Welfare Organization observed World Day against Child Labour by generating awareness among the general public with symbolic activities. The activities started from the JBF Informal School,...

15 May 2016 - 9:22pm | AT Kokrajhar Bureau
The first annual Rongjali Bwisagu Fwrbw, Dimapur was celebrated at Urban Haat, Rajabari, adjacent to  the ancient Royal palace of Kachari Kingdom in Dimapur(Nagaland) with day long colourful...