Come January 1. A slew of new announces is all set to come up for the people. Courtesy Dispur. Chief minister Tarun Gogoi has already directed the various departments to prepare innovative projects to be announced on the new year’s day.

Addressing a meeting of the senior officers in Dispur on Tuesday, Gogoi asked the heads of the departments to ensure that these projects are included in the next year’s budget.

7 Apr 2016 - 11:40am | Lester Makang
On April 1 and 2, the typically cold and dark Ukhrul nights with cloudy drizzling skies, came alive for a worthy reason. Those were the glamorous nights when the red carpet premiere show -- a first...

17 Oct 2015 - 8:01am | AT News Dimapur
Amid the confabulation of the Naga peace move, NSCN (K) has asked a section of ministers and MLAs to refrain from forcing them to toe the line of a particular political party. In a recent... 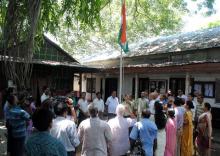 17 Aug 2013 - 4:48pm | AT News
The city based scribes and patriotic citizens have once again shown their defiance to the militant’s diktat on India’s 67th Independence Day with unfurling the National flag in a festive atmosphere....