Ulfa is gearing up to carry a series of strikes in the run up to prime minister Narendra Modi’s visit slated for November 29 and 30.

According to intelligence report, led by its self-styled commander in chief, the banned outfit is full prepared to target the BJP leaders and Hindi-speaking people in the next couple of days to make its presence felt. The disturbing inputs have forced the security forces to take precautionary measures to thwart any disquieting attempt.

Modi will be arriving in Guwahati on November 29 to open the conference of the DGPs and IGPs. Apart from it, he is scheduled to open a meeting of the chief ministers of all northeastern states.

22 Sep 2012 - 3:34am | editor
The Assam government keeps kept the air force on standby in view of the flash floods that renders lakhs of people homeless. Kamrup, Jorhat, Dibrugarh, Tinsukia, Dhemaji, Lakhimpur and Sonitpur... 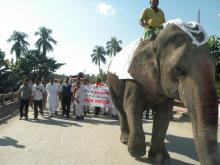