Is the Left has a chance in Assam in the 2016 Assembly polls? The answer is a prompt “Yes”. The secular forces have also no less prospect this time. This was more or less of what CPI(M) politburo member Sitaram Yechury said in Guwahati on Saturday.

Talking to reporters he said that the people in Assam are quite disappointed with Congress and BJP. “That’s why, a very deep political churning is taking place. They are upset with the Gogoi govt. But the Modi Govt at the Centre has not bailed them out of the situation,” he observed.

Yechury said, " the only coherent force is the Left and secular force. It is up to us and state leadership on how to exploit the situation."

18 Feb 2011 - 4:41pm | Ranjan K Baruah
The annual day celebration of the Old Boys Association (OBA) of Sainik School Goalapara (SSG) will be held at Shilpagram, near Samkardev Kalakhetra in Guwahati on February 19 with a day long... 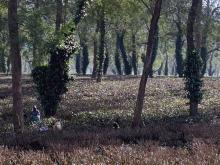 31 Jan 2021 - 7:25am | Samhita Barooah
Age is celebrated in Assam. People live their life fully through their ageism. Patriarchal ageism goes beyond gender. Any gender might practice ageism. People like to be ageing genders. Owning,...