Disaster Management department came in for sharp criticism on Monday when Assembly Speaker Pranab Kumar Gogoi was disappointed over alleged non implementation of a ruling of flood relief.

An angry Gogoi said he would take the department to the privilege panel for alleged inaction over non-utilisation of a two-year old flood relief fund for Sonitpur district despite his earlier ruling.

Gogoi told the House,”It is a breach of privilege and I will refer the matter to the Privilege Committee of the Assembly." He said,"We have to find out whose responsibility it is”.

The issue cropped up when AGP legislature Padma Hazarika raised 'Point of Order' during the Zero Hour alleging before the Speaker that despite his earlier ruling, a Rs 1.54 crore fund meant for flood relief has been lying idle in the district. The fund was allocated under CM's Special Package and all other districts, except Sonitpur have utilised their flood relief funds for helping the victims.

Minister Prithibi Majhi said it did not fall under his purview as it was "CM's Special Package". But parliamentary affairs minister Nilamani Sen Deka said all funds under CM's Special Package are always distributed to respective departments for usage under concerned topics. 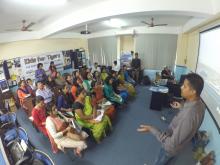 22 Oct 2017 - 9:04am | AT News
A Teacher's Environmental Leadership Workshop in Guwahati on Saturday stressed the need to concentrate on environment for a better tomorrow.  Organized  under the aegis of Kids For Tigers...

14 Aug 2014 - 8:13pm | AT News
The Government has announced Artist Pension at the rate of Rs. 4000 per month to 20 artists in recognition of their distinguished contribution in the field of Art and Culture for the year 2014...