After months of will-it-won’t-it, the Assam government has announced police commissionerate on Tuesday. The machinery would come in to force from Thursday.

Hemanta Das will look into the east side while Amitabh Sinha will be in the charge of the central part. DCP for west side of the city is Jitmol Doley while Pranabjyoti Goswami has been appointed as DCP for traffic.

The government has further announced five SPs for five new police districts. According to a notification, Longnit Teron will be SP for Majuli while his counterpart for Biswanath Chariali is Manabendra Deb Roy. Kangkanjyoti Saikia has been posted as Hojai SP while South Salmara SP is Mihirjit Gayan. Sudhakar Singh is SP for Sadiya. 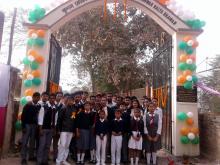 27 Jan 2018 - 12:42pm | Mubina Akhtar
OFT, in the stilly night,Ere slumber's chain has bound me, Fond Memory brings the lightOf other days around me:The smiles, the tearsOf boyhood's years… (The Light of Other Days- Thomas Moore)...

1 Jun 2015 - 5:05pm | Abdul Gani
Chief Minister Tarun Gogoi said that the state government would bear all educational expenses for the students belonging to BPL families under a new scheme to be launched soon. In a statement on...

25 Jul 2013 - 6:47pm | Peter Alex Todd
Bangladeshi infiltrators causing problems not only in Assam but throught the country. This had to be dealt seriously both by the state and the central government, said VHP's international working...