Polling over; eyes fixed on Tuesday

Polling for the Delhi assembly election is over. The turn out is a staggering 67 per cent. The figure is likely to go up. The fate of the candidates have been sealed in the electronic voting machines. The counting would take place on Tuesday.

Voters remained in loge queue in front of the booths from morning 8 to 6 in the evening on Saturday to elect representatives in the 70 seater assembly.

“Pollings passed off peacefully. There is no report of any untoward incident,” officials told Assam Times.

The election witnessed a keen and straight contest between BJP and a AAP. 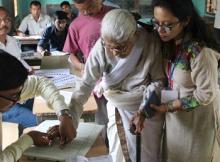 5 Apr 2016 - 8:24am | Daya Nath Singh
Continuing campaigns for Assam Assembly elections have confused the Assam intellectuals to raise vital issues before the future state legislators and improve the quality of political atmosphere...

4 Dec 2017 - 12:01pm | AT News
GUWAHATI:Yet another Hindu organization leader booked a day after he questioned the rights of the Muslim people to live in Assam. The All Assam Garia Moria Parishad has moved the Hatigaon Police...