Den of insurgents in BTAD!

Despite an intensive crackdown, Kokrajhar has become a den of NDFB(S) and MTFA militants who have been moving in BTAD areas without any hindrance.

Army claimed to have captured 6 NDFB (Songbijit) militants along with four Muslim Tiger Force of Assam (MTFA) insurgents during an operation during the last three days.

Three more NDFB (S) cadres were apprehended near Kachugaon in a joint operation by Army, police and BSF.

Identified as HeitaBoro, Ashok Basumatary and Ranjoy Boro, they have been extorting money in a huge area apart from providing food and rations to NDFB (S) cadre hiding in Ripu Reserve Forest.

Army and Police further claimed to have held an ULFA (I) militant on March 26. Identified as Raman Rabhawho, he was picked up from Gaksha village of Kashiabari area in Gossaigaon district.

In yet another joint operation Army and police apprehended four Muslim Tiger Force of Assam (MTFA) militants near village Kharkhari in Kokrajhar district. 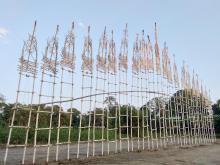 18 Oct 2017 - 12:43pm | AT News
Assam observed Kati Bihu across the state with traditional Hindu religious favouritism on Wednesday. Folks in rural areas ate planting tulsi to be worshipped in the evening in every household to...

27 Oct 2012 - 3:55am | editor
Governor Janaki Ballav Patnaik and Chief Minister Tarun Gogoi have greeted the people on the occasion of Eid-ul-Zuha on Saturday. In his message, Patnaik appealed for upholding the tradition of...