Acting on a FIR the authorities are likely to quiz DSP Moni Saikia and SI Moscow Saikia in connection with a number of cases.

In his FIR a journalist said that Chauhan in his confessional statement claimed to have received help from the police officers. 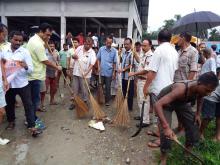 Be prepared to pay more

10 Mar 2015 - 5:32pm | AT News
Chief Minister Tarun Gogoi is proposing a slew of measures that would make you uncomfortable indeed. If you are planning to lodge at a hotel, be prepared to pay more.Gogoi, in his Rs 26.32 crore...