A book penned by former Union minister Bedabrata Baruah was released by veteran journalist Kanaksen Deka at Guwahati Press Club on Monday. The book titled ‘Mot-Abhimot’ is a collection of articles which were published in Guwahati based newspapers.

Releasing the book, the former president of Asom Sahitya Sabha, described Baruah as a non-controversial politician and a man of principle. Deka also emphasized on publishing all articles penned by Bedabrata Baruah in a single volume as he completes 90 years after three years.

Published by Dipak Baruah of Elora Prakashan, Guwahati, the book is priced at Rs. 120. The meeting was also addressed by senior journalist Nava Thakuria and book publisher Ganashyam Lodia.

In his address Baruah, who once practiced in the Supreme Court of India, argued that India must develop as a nation taking each and every stakeholder in confidence. He also denied the allegation that New Delhi was pursuing anti Assamese lobby all the time. Baruah also urged everyone in Assam to perform and contribute for the nation according to their capacities.

6 Aug 2018 - 10:28pm | Nikhil Mundra
Hojai: Two wild elephants died due to lightning strike in the Lankajan Dorjeesheet area under Hojai district along the Hojai-Karbi Anglong border on Sunday night. According to information, the two... 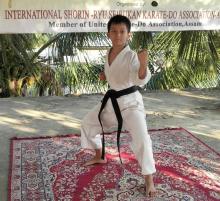