Prime Minister Narendra Modi’s proposed visit to Dhaka is expected to clear the decks for deporting Anup Chetia to boost the peace process with ULFA.

Sources told Assam Times in New Delhi that Modi will raise the issue during his trip Dhaka which would help Assam get the ULFA founder general secretary back.

“Chetia’s comeback is expected to boost the ULFA-Centre peace process which will help BJP woo voters in the run up to the assembly polls early next year,” say sources.

For the last couple of years, the Centre has been keen to get Chetia back. The UPA government signed extradition treaty after the ULFA leader himself evinced keen interest to be deported. But Dhaka’s delaying tactic made it difficult to be implemented.

“Dhaka is averse to deport Chetia only because of the uncertainty over the land deal which was running into a hail of protest in Assam. Since the uncertainty is over that’ why, Dhaka is bound to extradite the ULFA top leader who has been languishing in a local jail in Dhaka for the last many years,” a senior home ministry official told Assam Times.

10 Sep 2015 - 5:32pm | Chow Bilaseng Namchoom
Two premier tribes in  Arunachal Pradesh are gearing up for a historical showdown. Come September 20. The Nyishis from Lower Subansiri will strike a historic deal with the Apatanis to bridge the...

18 Aug 2012 - 3:52am | editor
The aftermath of BTAD violence has resulted in a string of violence in Lucknow in the form of arson under the garb of agitation to protest violence against Muslims in Assam and Myanmar. Around 50... 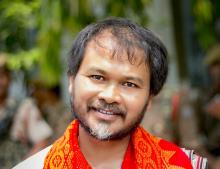 22 Aug 2020 - 3:28pm | AT News
Guwahati: Yet another regional party will surface in the state’s pre poll political landscape. Spade works are gathering steam in the nook and corner of the poll bound state. The party will be named...