The special police officers and Dima Hasao district administration are trading charges and counter charges over the mahir shoot out on Saturday where three agitating SPOs sustained injury.

The SPOs have alleged indiscriminate firing by the security forces who were deployed to deal with the situation in the Mahur camp.

“Even a section of the agitators targetted me. The situation went such an extent,” said a deputy commissioner.

Notably, the SPOs have been agitating for the last three days alleging that the government has gone back to the words.

Talking to Assam Times, an agitating SPO said,  “We have yet to be regularized. We have not received any salary. Even the government has withdrawn our arms. We lack safety security.” 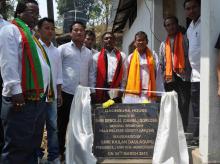 No Don Bosco statue in Guwahati

17 Aug 2015 - 7:47am | AT News
There won’t be any Don Bosco statue in Guwahati to honour the saint educator on his 200th birth anniversary. The Don Bosco Society has cleared its position after the miscreants thrown a statue at the...