The death of Jiban Singha is shrouded in confusion on Saturday a day after army claimed to have killed the KLO chief in the strike on the soil of Myanmar.
In his e-mail, ULFA-I spokesman Arunodoy Dohotiya said on Saturday that the Jiban is fine and healthy and that army have been resorting to blatant lies.
Army on Friday said that KLO chief was killed in strike inside the Myanmar territory along with more than a dozens of insurgents. Army further said that the bodies would be flown to New Delhi for confirmation through DNA test.
His family members in Coochbehar are caught in utter confusion in the absence of any confirmation from the government.

Gogoi to quit before Sonia 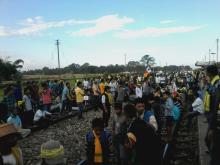 3 Nov 2014 - 7:40pm | AT News
Four persons were killed and three others sustained injury when a speeding truck rammed into an auto rickshaw in Bokajan on Monday. The incident took place in Gautambasti area in the morning where...