A team of police from Guwahati is seeking transit remand for four NDFB militants two days after they were apprehended in Bengaluru.

Identified as Tonon Basumatri, Sundun Basumatri, Nerson Basumatri and Jibnal Nersary, they would be brought to Guwahati for interrogatin by police and other investigation agencies.
According to police, they were hiding in their Laggere house, near Peenya to be raided on Friday. They have been working in a bag-manufacturing unit at Srigandhakaval, off Magadi Road.

31 Mar 2012 - 4:32am | editor
ULFA steps up strikes a week before its foundation day. A BSF man was injured when ULFA militants ambushed a patrol party in Goalpara district of Assam on Friday. The ambush took place at... 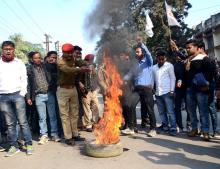 Indo-Bangla border to be sealed by Dec

17 Jan 2018 - 6:32am | AT News
NEW DELHI: Come December. A porous Indo-Bangladesh border would be a thing of the past if Assam chief minister Sarbananda Sonowal is to be believed. The Assam Chief Minister said it after he met...