A group of university faculty spent two-days at the start of its academic year 2015-2016 learning to come up with new business ideas for start up companies and process the same to a successful business plan and job creation, 10-11 July.

Assam Don Bosco University’s (ADBU) Human Resource Director Juhi Baruah giving the reason for the workshop said “as we embark on the new academic year, we need to continue being conscious of our role as educators in enabling students to create opportunities for themselves and inculcating entrepreneurial values.”

Baruah further stated that the Government plans implementing a scheme for entrepreneurship development that would “introduce specific courses in at least 5,000 colleges over the next three years as a means to boost employment opportunities and economic growth.”

The NEN trainers encouraged faculty members to launch the proposed start up companies motivating their students, and promised assistance in mentorship.

The ADBU’s EDIC Coordinator and Assistant Professor Rashmita Barua states, “the Ministry has a number of programs to help and assist entrepreneurs and small businesses.” 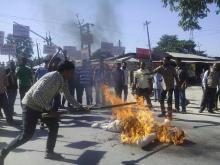 24 Nov 2015 - 7:28pm | Hantigiri Narzary
The All BTC Minority Students’ Union (ABMSU) burnt down the effigy of Governor PB Acharya condemning his recent speech of ‘Hindustan only for Hindu people’ on Tuesday at Bhotgaon in Kokrajhar....

29 Apr 2014 - 8:38am | AT News
One after another incidents of fire seem to have rocked Guwahati during the last couple of days. Properties worth lakhs of rupees were ravaged when the college of veterinary science in Guwhati caught...

26 Mar 2014 - 7:37pm | AT News
The filing of nominations for the second phase of Lok Sabha polls slated for April 12 ended on Wednesday.This phase covers Diphu, Karimganj and Silchar constituencies. Altogether 22 candidates will...