An eerie silence prevails in Bujuliban area of Tinsukia a day after suspected ULFA militants gunned down a local businessman and his daughter for refusing to pay ransom.

Security forces are fanning in the entire area to nab the gunmen who sprayed several rounds of bullets on the family members of Nandalal Shah. Shah died on the spot. His daughter succumbed to his injuries on the way to the hospital. His wife and daughters have been battling for life at Assam Medical College Hospital.

Senior police officials have been monitoring the operation and security forces have cordoned a huge area in search of the gunmen.

Various parties, organizations and individuals have vehemently condemned the attack on the Hindi-speaking business man’s family and demanded immediate arrest of the culprit.

7 May 2013 - 7:51pm | Abdul Gani
With a view to expedite the process of obtaining environment clearance for category ‘B’ type projects and activities in Assam, the Union Ministry of Environment and Forests has constituted the State... 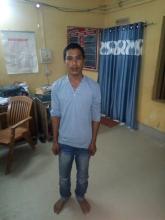 18 Mar 2018 - 8:59pm | Mithun Baruah
MARGHERITA: Armed men keep moving along the Assam-Arunachal Pradesh unleashing terror among the people these days. Security forces nabbed the linkman of a rebel outfit during the stepped up...