A full scale coming operation is going on in Tinsukia and its adjoining areas against ULFA after it threatened the Hindi-speaking people of dire consequences.

Police and para military forces are fanning in the vulnerable areas in search of ULFA militants who are believed to have been hiding to unleash more reign of terror in the form of extortion, killing and abduction.

Security forces are concentrating on the Assam-Arunachal Pradesh border in the district which is known to be an escape route for most of the militants after any strike in Tinsukia area.

Similar round-the-clock vigilance is in place along the Assam-Nagaland border areas in Sivasagar district acting on the inputs that a five member dreaded ULFA group has infiltrated from across the Indo-Myanmar border to monger trouble.

ULFA supremo Paresh Baruah on Thursday asked the Hindi-speaking protestors in Tinsukia to tender apology for accusing the outfit of killing the local trader and his daughter in Bijulibon.

He further threatened to kill the Hindi-speaking people if they refuse to tender apology.

Exam cancelled due to teachers absence

8 Dec 2012 - 4:32am | Jayanta Kumar Das
Annual examination in Tarabari LP school in Bhergaon sub-division near Tangla could not held due to absence of all the teachers. According to information examinees had to return home without... 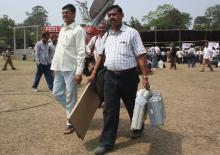