Security forces are fanning in Khandu forest area in Arunachal Pradesh in search of Rupom Asom who is believed to have been trapped after he sustained grave injury in the fierce encounter on Saturday.

From Friday night police, army and para military forces have been launching a combing operation inside the dense jungle apprehending the presence of at least two ULFA militants who have come down from Myanmar to strike in the run up to the Independence Day.

Rupom Asom who is also an accused in the Bijulibon trader killing is believed to have remained trapped after he sustained grave injury during the encounter with the security forces on Saturday wee hours.

The encounter assumes significance hours after a dreaded ULFA militant who is involved in the Tinsukia trader killing surrendered before police on Friday. 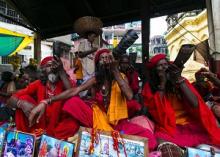 22 Jun 2014 - 9:20pm | AT News
Braving incessant rains, devotees from the state and outside are pouring in Nilachal hilltop after the ambubachi festival got underway on Sunday. Over 2 lakh devotees are arriving from different...

12 Sep 2015 - 10:03pm | Dibya J Borthakur
Police nabbed two Tiwa Liberation Army insurgents from Raha when they were on an extortion drive on Saturday. Identified as Tiken Pator and Rupjyoti Bordoloi, they were caught by the local residents...

23 Jun 2007 - 4:22am | editor
Guwahati: Union minister for development of the north eastern region Mani Shankar Aiyar says the Look East Policy can be successful only when the region links with South East Asia.Addressing a...