The ailment of at least ten people after inhalibng a poisonous gas creates no less panic in Moran from Saturday.
At least ten people have been taken ill after they inhaled fomelin gas which emitted from a tanker on the National Highway No 37 on Saturday night.

The tanker carrying fomelin gas meant for Kolkata from Namrup Petrochemical halted near the Popo Ground at around 9 in the evening. But some people nearby inhaled the gas which emitted because of technical snag.

Thus a huge traffic snarl took place on the highway for four hours. Later OIL officials arrived in the spot and took away the truck. 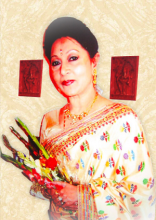 7 Oct 2015 - 10:04pm | AT New Delhi
Noted Satriya dance performer Pushpa Bhuyan passed away in New Delhi on Wednesday. She was 78. The end for the Padmashsree awardee came at 5-30 in the evening at a local hospital in Vasantkunj area...

21 Feb 2008 - 9:16am | editor
The fears of kala azars that gripped the people across the state have been allayed by the Guwhati Medical College Hospital authorities on Thursday. According ton information, the confirmation was...