“Cinema is a powerful medium to transform the society for prosperity”, said Bamang Felix. Inaugurating the three day long Arunachal Film Festival  in Nirjuli on Friday, the parliamentary secretary for information hoped Chief Minister Nabam Tuki would allocate Rs 1 crore this year’s budget as financial assistance to local film-makers, would further boost up the sector.

He, however called upon the film makers to showcase the inter-dependence aspect of the tribal society and depict the pan Arunachal image.

Information Commissioner and Sahitya Academy Recipient Y D Thongchi, who happened to be one of the Jury members of short films this year was in all appreciation for the young talented film makers who had ventured into making films. He further emphasized on making films on various other social sectors like games & sports, music etc and called upon the budding film makers to propagate cinema in proper way.

Planning and IPR Secretary Sonam Chombey while highlighting on the background of the Arunachal Film Festival said that the sector has progressed with leap and bound with its humble beginning. Chombey informed that the state is hosting the North East Film festival where local films of national repute would be screened during the 30th year of statehood celebration on February next. 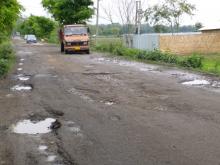 25 Apr 2018 - 11:02am | Akshaya Pranab Kalita
Namrup: The dilapidated condition of a vital road in Dibrugarh district has been causing no less inconvenience for thousands of local residence apart from those who keep travelling in area. That too...

8 Apr 2014 - 3:28pm | AT News
Silchar is gearing up for Rahul Gandhi’s visit on Wednesday. During his three hours visit, the Congress vice president will hold a rally in the town.Senior party leaders told Assam Times that Gandhi...

24 Mar 2012 - 4:22am | editor
Jorhat police on Friday got remand of Panchi Gogoi Dutta after they arrested the main accused in the Ginoria kidnapping cases on March 10. A lower court in Jorhat remanded Dutta to five days...