Suspected militants are believed to have killed an intelligence officer in Meghalaya sending sensation across the north eastern region on Friday.

The needle of suspicion points towards ASAC who killed the newly recruited inspector a day after he was kidnapped along with his associate. His body was found in South Garo hills in the evening while his associate is still remaining clueless. 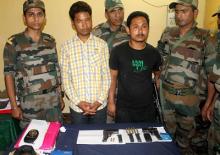 10 May 2015 - 11:12pm | Hantigiri Narzary
Security forces have claimed to arrest two NDFB-S cadres and a linkman at an operation from Tamulpur area on Sunday in Baksa district. The cadres and linkman was arrested by security...

10 Jun 2008 - 2:55pm | editor
Three hardcore ULFA cadres were killed and a lady cadre has been apprehended in two separate encounters in the state on late Monday last night. According to information, ULFA leader sergeant Aditya...

10 Mar 2008 - 3:44am | editor
ULFA is set to target against the Hindi speaking people in Assam forcing the authorities to beef up security arrangement in upper Assam. The banned insurgent outfit shot dead three brick kiln workers...