Talking to Assam Times, the AJYCP workers said that they won’t allow the Centre to implement the refugee notification and that they want the ILP system to be implemented. “We have been demanding the system since 1978. But the governments at the Centre and state have not been considering it. We will intensify the agitation if the government fails to step in,” said an AJYCP leader in Guwahati.

AASU sit in at Margherita for women varsity 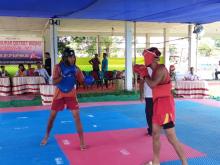 27 May 2017 - 6:54pm | AT Kokrajhar Bureau
A two-day wushu championship of Kokrajhar District Wushu Association has began at Government HS & MP school ground in Kokrajhar on Saturday. Over 150 participants from different clubs of...