The Journalists’ Forum Assam (JFA) has condemned the killing of yet another scribe in Uttar Pradesh and demand a national action plan for justice to those journalists. In a statement, the organization said the murder of Hemant Yadav increased the tally of slaughtered media persons to four this year in the country.

Yadav, a middle aged journalist who worked for Hindi news channel TV 24, was shot dead by two motorcycle-borne miscreants on the night of October 3. The incident took place at Dheena area of Chandauli district, where Yadav faced the brutal attack.

The last incident of killing of a journalist was reported from Maharashtra, when a Thane based journalist Raghavendra Dube was killed by some miscreants. Dube, who edited a local news weekly was beaten and stabbed to death on July 17. Dube’s killing took place after he had covered a police raid on a night bar.

Earlier this year, two journalists, Jagendra Singh from UP and Sandeep Kothari from Madhya Pradesh were also killed in separate incidents by miscreants.

18 Jan 2009 - 1:36pm | Aiyushman Dutta
There is no doubt that HIV and AIDS is one of the greatest scourges ever to affect mankind, but at the same time, it has also given rise to a lot of creative works. Ever since its discovery, artists... 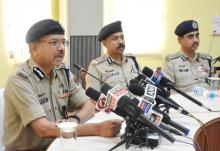 11 Apr 2019 - 10:58am | Prasenjit Saha
Agartala: Tripura DGP Akhil Kumar Shukla has assured a violence free election in the Lok Sabha election throughout the state. Addressing a press in the police headquarter in Agartala on Wednessday...

4 Jan 2019 - 11:52am | Nava Thakuria
Journalists’ Forum Assam (JFA), while expressing serious concern over repeated attacks on working journalists across India, insisted on honoring media wisdom by both media and non-media entities. The...