Arunachal Pradesh governor JP Rajkhowa on Thursday expressed grave concern over the alleged encroachment of the land belonging to Donyi Polo Mission School for the Hearing Impaired in Chimpu.

In his address at the silver jubilee celebration of institute in Chimpu he called upon the Chief Minister and district administration for immediate action to evict the encroachers. He also hoped that the government will release the amount of Rs 1 crore in the current financial year for the institute.

Rajkhowa further said the society and social attitudes play an important role in determining the participation of differently abled people in social and economic life, often even within their own families.

In his address, founding chairman and former chief minister Gegong Apang recalled the early phase of the school and thanked the people who had contributed towards its growth. Calling for more public awareness, he said it is due to ignorance of the parents that many children become handicapped.

.Rajkhowa felicitated the Apang and Principal of the institute H. Sharma and dedicated staff Haridas Burman and Sammang Tayeng on the occasion. Rita Rajkhowa, Marnya Ete, Taw Tebin, Swami Vishweshananda and Nima Tsering Khrimey graced were prominent among those who were present in the function.

25 Jun 2014 - 10:01am | AT News
Parts of the upper Assam districts have come under flood after the waterlevels of the Brahmaputra and its tributeries rose following the incessant rains that lashed the catchment areas during the...

20 Oct 2012 - 4:14am | editor
Assam Governor J B Patnaik and Chief Minister Tarun Gogoi on Friday conveyed heartiest greetings to the people on the occasion of Durga Puja. In a statement the governor appealed to the people to... 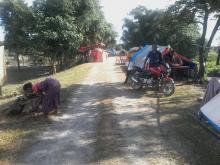 1 Aug 2016 - 11:11pm | AT Kokrajhar Bureau
Although schools were reopened from Monday after month long summer vacation across the state,but students along the flood affected areas were deprived from getting educational facilities following...