Renowned Assamese filmmaker Santwana Bardoloi will announce her new movie tomorrow at Guwahati Press Club. The Adajya fame director is scheduled to address the media on Tuesday at 10 am.

Acclaimed film personality Adil Hussain and eminent camera person Gnana Shekhar will also attend the press meet. The film-fraternity of the country is eagerly waiting for her next venture after Adajya, which was produced in late Nineties. 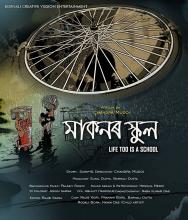 9 Apr 2019 - 6:29pm | Prantik Deka
Director Chandra Mudoi, always a capable man behind the megaphone, has just completed the post-production works of his new Assamese film ‘Makonor School’ (Life too is a School). The movie marks a new...

18 Nov 2007 - 9:48am | editor
he north eastern students vow to stop illegal infiltration from across the border in the region.They will care not even an iota to go to any extent to check it.This is more or less of what the...

Jagun toll goes up to 3

23 Jan 2017 - 3:56pm | AT News
One more Assam Rifles jawan succumed to injuries in Sunday’s rebel attack in Tinsukia district. He was declared dead on Sunday night 12 hours after he was rushed to the hospital. Two others died a...