Assam Chief Minister Tarun Gogoi is confident that Congress will retain power for the fourth consecutive term. He his government and party are well prepared to beat the heat of anti incumbency in the assembly polls early this year.

"We can't deny anti incumbency factor. But I don't think it would mar our prospect. Pressure is there always. Our experience suggests that we would be able to overcome the anti incumbency hurdles. How we have been beating these factors in the last three times," said Gogoi when he was interacting with media people at Koinadhara on the new years day on Friday.

He observed that BJP will be facing it difficult following the defeats in Bihar, Delhi and Uttarkhand.

He claimed that the common people are still with the Congress to retain the party for yet another term. This, according to him, because of the commendable performance of his government. 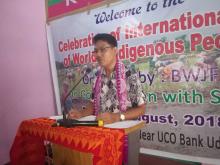