Promod Boro, president of the All Bodo Students Union (ABSU) has been expecting good governance in the state of Assam as assembly polls passed off peacefully across the state without any untoward incidents.

In an exclusively talking with this correspondent on Friday in Kokrajhar, Boro said that peoples of the state are want social integration through good governance by whom the state government would be formed after May 19 next. ‘There are several issues and steps are to be implemented in the state, including Bodo Accord, Assam Accord, demands from different organization and communities should be solved as soon as possible across the state to meet healthy living. Citizens are always seeing the positive attitude from government, but government never think welfare of the social life’, Boro said.

He said that both parties, either Congress or BJP who are going to form state government, they must prepare road map about state based policy to bring welfare of the common peoples.He said that the new state government should take bold step to the demand of Bodoland state, solutions of Bodo medium issue, otherwise the ABSU compelled to take mass agitation in days to coming’,he said 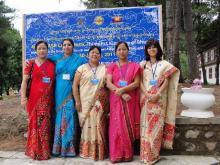 12 Jul 2011 - 11:42pm | editor
Five scholars from Assam were invited to participate and present their papers in the 4th International Conference organized by the South and Southeast Asian Association for the Study of Culture...

Journalists&#39; workshop at Tangla on Dec 30

13 Dec 2011 - 1:40am | Jayanta Kumar Das
Bodoland Journalists' Association, Bhergaon district committee will organize a day long workshop for print and electronic media personals on December 30 at Tangla.The workshop will be organized in...