Memorandum to Home Minister on issues of Bengali Hindus

In the meeting held in the home minister’s chamber in the Parliament House, the ABBYSF submitted him a memorandum highlighting various issues being faced by Bengali Hindus.

The memorandum firstly congratulated the Union Home minister for the historical victory of the BJP led grand alliance in the state assembly polls.The memorandum expressed great hopes in resolving the issues Bengali Hindus under the BJP government at the centre .

The memorandum lastly demanded ex-gratia to the family members of Bengali Hindus who have been killed by various extremist groups. 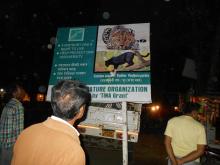 22 Dec 2009 - 1:36am | Nanda Kirati Dewan
With the advent of Christmas and New Year, flavored and delicious cakes are in huge demand. From December 21-23, this maiden cake festival “Pre-Christmas Cake Festival 2009” is being...

Cong in Catch-22 over Rahul visit

22 Feb 2014 - 10:34pm | AT News
All worries seem to have bubbled up for Congress. That too in the time of Rahul Gandhi’s much-hyped visit.The most disappointing news struck the ruling party at 1 in the afternoon when KMSS...