Sonowal gets tougher with militants

Assam Chief Minister Sarbananda Sonowal on Sunday has asked the security forces to ensure the safety of the common people at any cost two days after 14 people died and several others sustained in firing and bombing at an open market near Kokrajhar.

Sonowal, who reviewed the law and order situation in BTAD areas at a meeting in Kokrajhar as police, army and para military forces to firmly deal with the insurgent who have been unleashing violence at regular intervals.

He furher asked the authorities to intensify the counter insurgency operation in and around BTAD districts. 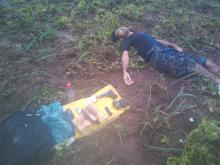 10 Jun 2015 - 11:08am | Hantigiri Narzary
A hardcore cadre of NDFB-S was killed in an encounter with security forces at Kajigaon Pathardubi area under Parbatjhora subdivision of Kokrajhar district early morning today. According to...

18 Apr 2014 - 11:12am | AT News
A full grown rhino is believed to have died a natural death in Kaziranga.     Forest gaurds have recovered the carcass with its horn in Bagori range of the national park on Friday....