A BJP legislator claims to have received extortion notice of Rs.1 crore from ULFA-I suggesting the failure of the 4 month old Sarbananda Sonowal Government.

He is none other than Balin Chetia who took up the case with Chief Minister on Friday. The BJP MLA from Sadiya confirmed it inviting the opposition Congress to alleged that even a ruling party legislator is not safe and secured in the regime of Sarbananda Sonowal. 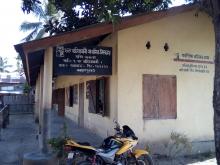 5 Dec 2017 - 3:58pm | Simanta Hazarika
LAKHIMPUR: Assam education minister Himanta Biswa Sarma claimed to have brought a sea change in the education sector. But his “sea change” is confined to areas only. Many areas are still lagging...

3 May 2014 - 9:25am | AT News
In a major setback for Assam’s health sector, the Medical Council of India has cancelled the recognition to two of the newly set up medical colleges.Reliable sources have told Assam Times that MCI...

29 Aug 2012 - 2:52am | editor
Amid violent bandhs chief minister Tarun Gogoi on Tuesday said that these would only complicate the situation. Talking to reporters in Guwahati he said that the time was not proper to call...