A 30-year-old forest guard was injured when a rhino attacked him in Orang National Park at about 8 am on Sunday. The guard, Kartik Dey, was on duty at Kunakata camp area with other forest personals when the full grown adult rhino all at a sudden attacked him. Dey sustained injuries on his chest.He was later taken to Mangaldai Civil Hospital were he is being treated a forest department official said. He is stated to be out of danger.

14 Sep 2011 - 10:20pm | Amarjyoti Borah
The Centre for Environment, Social and Policy Research (CESPR), a Guwahati based organization is planning a series of legal camps in several places across Assam. According to researchers of CESPR...

26 May 2017 - 8:15pm | AT News Imphal
Former MLA Karam Thamarjit Singh passed away following a brief illness at Apollo Hospital, New Delhi on Thursday.  He was 46. His body will be brought back to Imphal Saturday. Thamarjit... 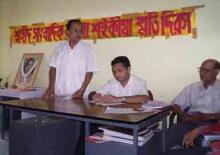 10 Aug 2008 - 4:24am | Ritupallab Saikia
A seminar titled “How safe is journalism in Assam” was held on 9th August at Golaghat Press Club in memory of late journalist Kamala Saikia. The seminar was presided over by Sri Devojit...