The students union observed 30th Bodoland Demand Day on Thursday at different places across the state to mark the mass revolution day which was started on 2nd March in 1987 seeking separate Bodoland state.

The 2nd March from 1987 has been a remarkable and historic for the Bodos. On this day the then president of the ABSU Upendra Nath Brahma had launched the democratic mass movement demanding separate state Bodoland from Sonkosh to Sadiya the northern bank of Brahmaputra. However, the demand is not yet resolved and the mass democratic movement is going on continuously. It has been 30 years the Bodoland demand is ignored by the Government of India. Such a long pending issue which was earlier launched in 1967 demanding statehood by name Udayachal and totally it is now 50 Years has been elapsed,the ABSU said.

The ABSU and its movement groups-NDFB(P), PJACBM jointly submitted memorandum to Prime Minister of India seeking early solution of Bodoland issue through political dialogue to gain good governance in the region. The demands included, holding tripartite talk at political level before Parliament session, policy decision on creation of Bodoland state with immediate effect, ensure political right to the Bodos living outside the proposed Bodoland area and invite all the revolutionary Bodo organizations for joint talk on the Bodoland issue.

The joint movement group declares the series of movement programme which include indefinite mass hunger strike from March 10, National Highway and railway blockade for 24 hours in last week of March, Jail Bharo in April next, non cooperation with the state government on May and other series of movement programme will continue unless the government resolves the Bodoland issue within a stipulated time frame,the ABSU said. 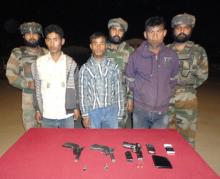 2 Mar 2012 - 5:08am | Hamidul Gani
Four NDFB and three GNLA cadres were arrested in three different search operations on Wednesday. In the first operation, launched by the police and CRPF jawans, one NDFB cadre was held at Mandalgram...

18 Dec 2007 - 5:06am | editor
Both NSCN factions in Nagaland are in talk to regroup for restoration of peace in the state. Talking to a private TV channel on Monday over telephone, NSCN Khaplang home minister Wanting Naga said...

14 May 2017 - 12:21pm | AT Kokrajhar Bureau
An eight members AUIDF delegation expressed grave concern over the plight of the people at a detention camp in Kojrajhar after they visited it recently. During the recent visit, all eyes were...