Sea of people, young and old, men and women, irrespective of caste, creed and community, headed the 'Baukhungri Hill’ to scale the Hill on the Sankranti, a day before Bwisagu or Bihu.

The Bodos traditionally celebrate the festival as Baukhungri Hajw Gakhwnai (climbing of Baukhungri Hill) on the last day of Choitra month (April 14) that is Sankranti.

The festival gathers its attraction and availing of different enjoyment, apart from adventure sports like paragliding, indigenous games like Khomlainai (Bodo wrestling) and cock-fighting and traditional cuisine from all over the region and a food stall from Bhutan created huge tasty of ethnic foods in the fetival, was organised by Tourism department, BTC on the eve of Bwisagu(Assamese new year).

Mahan Chandra Brahma,Official of Tourism department,BTC said that the Baukhungri festival is a national festival of Bodoland region,especially on the eve of Bwisagu or Bihu where peoples from all walks of life participates with great enthusiastic moment. He said, ‘The traditional Bodo custom to climb the hill called ‘Baukhunguri’ on the auspicious day of Sankranti which has been celebrating as a festivalevery year in a systematic and organised way’.

J Basumatary,Organising member of the festival said that since (time) immemorial, locals have been thronging and climbing Baukhungri Hill near Kokrajhar town in an unorganized manner,but since four years back, it has been organized by BTC Tourism department in well organized. The festival has been exploring tourism field in the region through which tourists are visiting to see natural beauties and scenes.

Visitors from across the country and neighboring Bhutan thronged at the festival and expresses their gladness in festival as well hill climbing situation.

Various adventurous sports like trekking competitions, paragliding, indigenous sports like khomblainai etc and food festival with indigenous food items to attract tourists from all over the region, besides organizing multi-cultural showcasing was also presented on the festival. 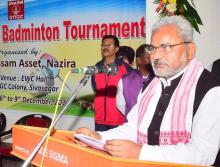 7 Dec 2017 - 10:02am | AT News
NAZIRA: Altogether 101 participators are in the clash for the four-day long ONGC Inter-Sectoral Badminton Tournament which is underway at Arjun Bhogeswar Baruah Indoor Badminton Stadium.   All...

23 Apr 2014 - 10:13am | AT News
Amid massive security arrangements, Mongoldoi is all prepared to go to the Lok Sabha polls on Thursday.Altogether 15,55,480  voters are set to exercise their franchise in over 170 polling booths...

15 Jul 2007 - 4:41am | editor
Way back in the late 1960s, there were two individuals in the then sleepy town of Jorhat who were making and dreaming music in the confines of their homes. The young boys used to go to the local...